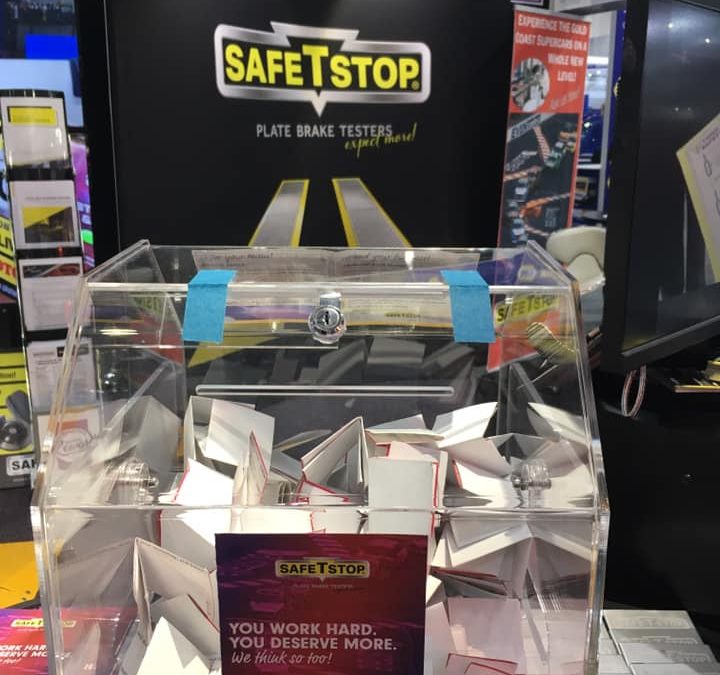 The event in Melbourne was the Australian Automotive Aftermarket Association Expo, at the Melbourne Exhibition Centre.  It is held alternately in Melbourne and Sydney, so next year it’s in Sydney. There are educational as well as social events, as well as the stands including everyone involved in the motor trade.  In the concourse, outside the Exhibition Hall, the SafeTstop Lamborghini was on display with the Feature Cars, and it attracted plenty of attention!

The SafeTstop stand was very busy and we caught up with many of our existing partners as well as many who are keen to find out more about the system. Five of our staff were on the stand, with new literature, and the fabulous video wall, to share with everyone what SafeTstop can do for your business, and some of the experiences of our partners.

We had the Short Track Ultima and the Truck Stop systems set up, as well as the raffle barrel so we could draw the Gold Coast Supercars raffle – which was won by Terry Burt, from Ultratune in Kangaroo Flat.  He is VERY excited to be joining us with his partner, for the luxury weekend of Moet and racing on the Gold Coast later in the year.

It was a fantastic opportunity to learn and be inspired, and we look forward now to the Brisbane Truck Show, May 16-19.  It’s another huge event where we hope to see many of our partners, and those wanting to know more about SafeTstop and what it can do for a workshop.